The Big Bopper is a licensed slot machine, created by RTG and based on a very popular star of the 50s, a musician that was into rock music. He died in 1959, in a plane crash, in which Ritchie Valens and Buddy Holly also passed away.

The Big Bopper was the nickname of Jiles Perry Richardson, Jr. His most famous song is called Chantilly Lace. The slot machine that we get here is dedicated just as much to the musician as it is to the beginnings of the rock and roll genre.

It’s a very retro looking game, which you will probably enjoy. It sports a ways to win system, it has 6 reels and it may pay as much as $1,500.

You will figure out immediately that the slot tries to mimic the classic look of the 50s, which many appreciate, as visible when you look at the kind of audience that shows like Mad Men had.

The symbols which were chosen for The Big Bopper are all music related, showing various objects from those times, including record players, microphones, platinum records, old radios, records, old rotary phones and guitars, though I’m mentioning only a couple of the images you will see on the reels. You will even find the famous musician that the slot is based on, in one of the major symbols.

One of the obvious things that are different here is the use of 6 reels, instead of 5. A combination will form in this game not only on adjacent reels, but also starting from either side of the screen. You don’t get the wins just by having them from left to right, but also from right to left, which makes it a better choice than most slots with 243 ways to win.

The slot is feature rich, and one of the symbols which will act in a special way is the one with The Big Bopper, the musician. You’re getting wilds of this type only on the middle four reels, so they will not be capable of forming their own combinations. Still, they triple prizes they help award, so it’s always great to have these symbols present. 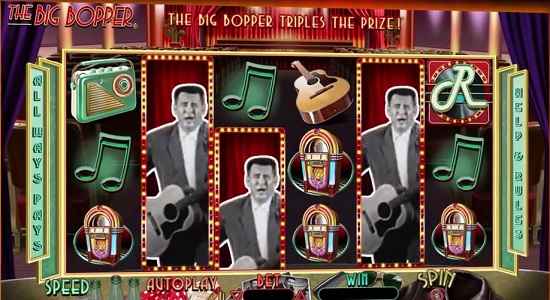 Should the game land six symbols with scatter abilities on its reels, spelling the name BOPPER, it will trigger a feature. With five or fewer symbols, it will just award prizes of up to 3x the bet. The feature which the scatters can trigger will be picked at random.

If you have only 3 to 5 symbols with scatter abilities, then a re-spin is triggered, trying to get you that sixth symbol that you need to get the feature. You keep getting these re-spins for as long as the combo of scatters keeps improving.

One of the features which can be triggered when you have the BOPPER scatters present, is the one called Instant Win. You keep getting paid for as long as the singer keeps singing. You can go from 20x, to 50x, 100x and even to 250x the bet value this way.

A second possible feature is called Chantilly Lace Free Games. You can get a maximum of 45 free spins, with a multiplier that reaches 10x.

The third feature is called White Lightnin’ Free Games, which keep going for as long as the music is heard.

The payouts seem quite low at 6,000x, especially since you need a wild to get them that high, but considering that it’s a slot with ways to win, and that the free spins can have up to 10x multipliers, it doesn’t seem to have that many downsides anymore.

I enjoyed the game very much, and I’m satisfied with what RTG did in this case. It’s also a cheap slot to play, so you don’t have to invest too much to see if you like it.