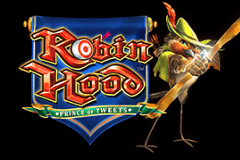 Robin Hood: Prince of Tweets makes a connection between the old story of the robber that took from the rich and gave to the poor, and the modern angle, though it manages to keep it a classic.

The modern angle is mentioned only through the “tweets” bet, which refers to Twitter, but on the reels you will see only the birds which do all the tweeting. Instead of humans in the main roles, all those main characters are various types of birds.

The rest of the symbols keep the same idea of Robin Hood, and they involve money bags, archery practice targets and other similar symbols. This slot has 40 paylines and can award payouts of $8,000.

Even though the slot has its fair share of poker cards among its symbols, you will find it to be quite charming. The cartoon style birds which are used for the main characters are all dressed up as the humans would’ve been, and there is even a fat Friar Tuck bird enjoying a mug of ale next to a keg.

Robin Hood and Lady Marian are the two other major characters which were used in the game. There are other themed symbols as well. Naturally, the action inside takes place in Nottingham Forest, and you can see it in the background picture.

The game gives you the opportunity to use a SuperBet if you want to, taking the number of coins per spin from 20, to 50 or 100 coins. If the SuperBet is not active, the feature called Robin Hood’s Arrow can only turn the Princess into a wild.

With the Level 1 SuperBet, it can turn the symbols with the Owl and the Pouch as well. At Level 2, besides the three I just mentioned, the icons with the Target, Poster and Quiver can also be turned into wilds.

Speaking of the wild, a brave little bird that is dressed up as Robin Hood is shown in it. This symbol is mostly used as a substitute, and normally it appears only on the 3rd reel. It can trigger a feature called Robin Hood’s Arrow though, where our hero turns nearby symbols into wilds as well.

That’s where that SuperBet comes in, as its level will determine how many symbols turn into wilds. Since at this point you have a lot of wilds present, you can even form combinations and get paid up to 250x through these wilds.

The scatter’s picture is the one with the Castle on it. As every scatter does, this one will give you rewards simply for having three or more icons of this type on the reels. The payouts vary from 160 to 4,000 coins, which means that it offers the biggest payout of the game, at $8,000. 3, 4 or 5 scatters also get you access to 15, 20 or 25 free games.

I’m never a fan of poker cards, and the slot has six of them filling up the quota of icons. Those could’ve been other characters from Robin Hood’s band of merry men, or some of the villains.

I think it’s a fun game, but its payouts can be on the low side most of the time. The SuperBet is also very expensive, but it might be worth it given the number of wilds which it can place on the reels.