Golden Caravan is not just any oriental trading themed slot machine. Its main focus is on a character that is visible in one of the symbols, which went by the name of Marco Polo. A well known traveler and trader of the 13th century, Marco Polo’s travels are known thanks to the book that was written about them.

He is famous these days, thanks not just to the book, but also because movies and TV series were done based on him. The slot machine which we’re seeing here comes from Play N Go, and it’s a 5 reel/10 lines title, with prizes that can go up to $25,000.

The slot was created with mobile devices in mind, and so you’re going to notice few buttons on the screen, just three total, two of them being sufficient for the game. You have a button to spin the reels, and a second one to access the options, including the wager and the paytable.

The graphics were done in a style which is typical for a game that has a main character from the Middle East, with an oasis, with camels and with a young Marco Polo that’s wearing a hat that you might mistake for a turban, if you don’t know how wealthy people dressed back in the Middle Ages.

There is nothing wrong about the symbols which are themed, it’s the ones that are not that don’t seem to fit here (the poker cards).

One of the features mentioned in Golden Caravan is the scatter, a symbol which is represented by a Camel, loaded up with all sorts of luggage. The appearance of three Camel symbols in the game, in any position, will trigger a feature with 10 free spins and multipliers. 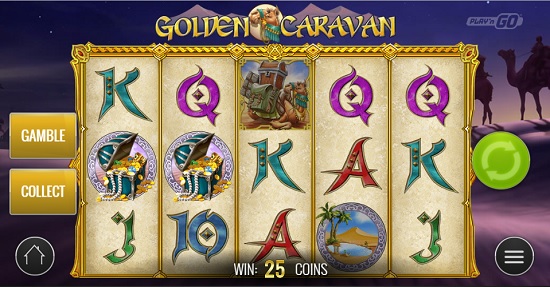 To get a higher multiplier for your wins, you need to retrigger the free spins, since that will give you another 10 rounds and will also increase the multiplier value by 1x. The Camel symbol becomes a wild during this feature.

Another wild which the game uses, both in the base game and during free spins, is the one with Marco Polo as its image. Shown as he’s holding gemstones and jewelry in his hands, Marco can act as another symbol by substituting for it in the position where it landed, but only if this gets you a new paying combo. Marco Polo forms combinations directly as well, offering 5,000x in prizes this way.

I doubt the game will have a lot of fans when it comes to the poker cards which take up half of the symbol positions. The presence of only 10 lines is another downside, since you can expect prizes to come less frequently.

I think the game deserves its chance. It has the right theme, which is not very common, it has a couple of decent features and payouts which are only average. The downsides are also there, mainly the number of lines being the issue.