A new release from Net Ent, Warlords: Crystals of Power seems to have a fantasy theme, one where rulers of ancient kingdoms fight each other.

They’ve been fighting for a long time, and they’re actually the last three rulers left standing, part of a greater war.

The Samurai, the Barbarian and the Priestess are the main characters, the rulers who each have their own features in this game. Among those features, you will have wild symbols, scatters, random overlay wild features, three types of free spins and re-spins.

You have 30 pay lines inside, the game has 5 reels for them, while the prizes could potentially reach $3,000.

One of the aspects of this game, which you will probably appreciate, is the quality of the design. This is an area where I praise Net Ent each time they release a new slot machine, since their games always seem to offer more than the competition when it comes to graphics.

The symbols start you off with the three main characters, shown stacked on the reels. The Samurai has a wolf next to him, the Priestess a black panther, while the Barbarian is accompanied by a boar. 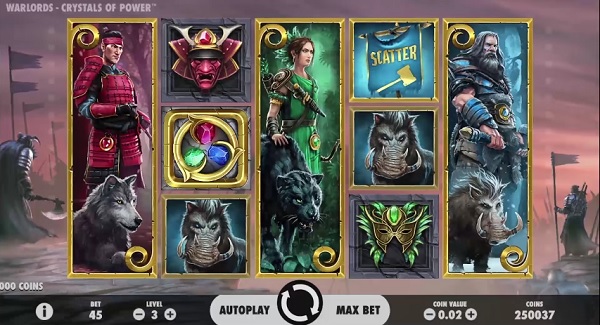 The three wild creatures also appear on their own symbols, along with the images of the Samurai helmet, the Priestess mask and the Barbarian horned helmet.

The wilds of Warlords will deliver you prizes directly if they manage to form a combo of up to five, paying 300x if that happens. They also are used in various ways, depending on the random Overlay feature that gets them triggered.

Three types of Overlay Wilds can be triggered, and will place a certain number of such symbols on the reels, instead of existing ones. Each character can trigger a different feature.

The characters also have their own scatter symbols, which can be used to trigger free spins. You get 3 spins for free, 1 sticky wild and the 1x multiplier to start with, to which the game adds extras, depending on the scatter type.

Re-spins are possible when you have 2+ scatter symbols in place. During re-spins, scatters are allowed on all five reels, not just the middle three.

You have to do a lot of reading to figure out all the features of the game. Every single one seems to have a version for each of the three characters. The complexity could be a downside for some, or a plus for others.

Warlords: Crystals of Power has a superb design, has a lot of features to trigger if that’s your thing, while its payouts could get up to $3,000.