Paranormal Activity is a slot machine which was released by iSoftBet. The game’s inspiration is taken from a series of six movies which all had this name, and which were based on a story about a demon that haunts a family, killing some of them, scaring others.

The action was filmed by security cameras or by the members of the family themselves, giving the impression that there were no camera people around. It was a hugely successful series, at least in terms of the profit it made its creators.

The slot machine that we got here has 243 ways to win, there are 5 reels, and among the features you will find the three types of free spins, along with scatter symbols, wilds and even multipliers. The biggest prize possible from a single combo will go up to $500.

There are both good sides and bad sides when it comes to the symbols picked for this slot machine. I enjoyed the ones who seem to have some theme connection, like the ones with the ghosts, with bloody hands, Ouija boards, cameras or mysterious signs.

The quality is great if you check out the themed symbols and the background graphics. Though you don’t have images of actors, you get elements which were part of the original films released by Paramount Pictures, the ones that gave iSoftBet the license to create this slot machine. 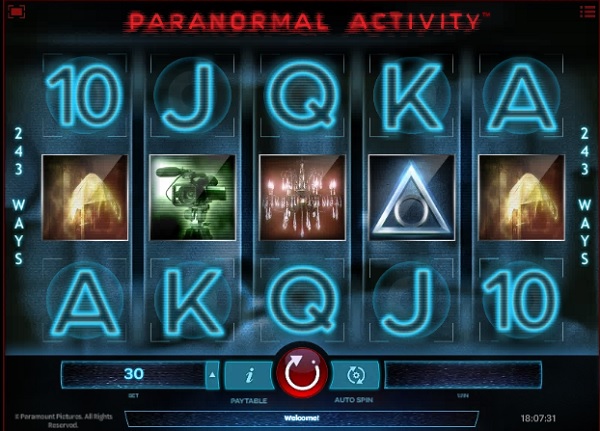 One of the features offered in Paranormal Activity is the wild symbol, the one that you can use to replace another icon, provided that it first appears on a reel where it is needed.

The other reels need to have the rest of the regular symbols, which the combination will form while taking the wild as well into account. Wilds do not replace scatter or bonus symbols.

You get paid a decent amount when the scatter symbol, the one with the Bloody Hand, will appear between three and five times on the reels. The rewards get up to 750 coins this way, which means up to $150 cash.

A more interesting scatter is the one marked Bonus, which is reserved for the reels 1, 3 & 5. You get all three if you need to trigger the bonus feature, the one with the Bonus Wheel. This Bonus Wheel can deliver to you instant wins of up to 750 coins, or one of the three types of free spins. 5 to 15 free spins are given here, with various cool features next to them (5x multipliers, stacked wilds or extra wilds).

The symbols have a side that I’m not happy about, and those would be the poker cards, or the Royals if you will. They are simple letters or numbers, and they don’t contribute to the scary atmosphere in any way.

Paranormal Activity can be a great addition to any player’s list of games to play on Halloween, though fans of the series can give it a shot at any time.