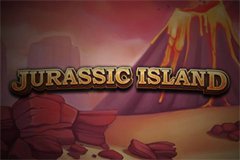 The title being Jurassic Island, we’re naturally looking at a game which shows off the dinosaurs that are supposedly living on an island.

It’s a similar action to that of Jurassic Park, where there was also an island involved. They’ve added a colonial era hunter to the reels, which I assume has paid for the opportunity to hunt dinosaurs. He is armed with only a simple rifle.

The game has for its symbols the image of that hunter, along with predator and herbivore dinosaurs, as well as the skull of a triceratops. For the least valuable symbols, they’ve picked poker cards, but they’re made with the help of bones which were tied together in the required shapes, so they at least look interesting.

Established in 2000, Ash Gaming has a decent collection of games on offer these days, slot machines which were created so that they can entertain the player. I think that you will find their graphics to be highly satisfying, which makes their slot machines easier to enjoy.

Jurassic Island is exactly that kind of game, which offers great graphics and interesting features, but it’s far from the only one. There are also slots like Catwalk, Britains Got Talent, or Fortune Spinner.

You might not get the option to change the number of active lines, always set to 25, but the line bet is another matter. That one will start at $0.01, so the game’s minimum bet will be $0.25. The higher you take the line bet, the higher the total bet will go as well, they are directly connected.

Even with the poker cards present, the game manages to look very good, and I enjoyed it a lot because of the design. The various dinosaurs look scary, and they are shown in the background image as well, both on the land and in the sky.

You should expect the Raptor symbol to take the role of the wild feature. If the lines on which the wild appears also have matching symbols on them, combinations might form under the right conditions. Those combinations are only possible because a wild helps out.

The other symbol to consider is the Hunter, which is a scatter in this game. The presence of the symbol in 3+ positions will turn into a feature. There, you will have one bonus game and three free spins modes to choose from.

With the bonus game, you have a new screen, with dinosaurs appearing and you being asked to shoot them. Each one you hit will give you a prize. With multipliers and different dinosaur values possible, payouts could go as high as 180x total bet apparently.

The other options deliver to you different types of free spins. The Raptor Free Games have 16 to 40 free spins, along with Raptor wilds which appear stacked and then expand on their reels.

The maximum payouts reach 1,000x in the base game, or 3,000x during free games. There is the potential for more if you reach the bonus game.

Jurassic Island gives us a dinosaur hunting theme that I’m sure will be fun for most players, plus some great features to play through, if you can get them to activate that is.