The Basketball Star video slot was recently introduced by Microgaming as a game that is a continuation of the company’s extended line of sports-themed video slots. This is a game that has several ways to win with some big payouts possible for all players. This is also available for Android, iPhone and iPad devices. It is a popular game that will certainly be attractive for players to check out even if they aren’t all that interested in basketball.

This five-reel slot uses a layout that features symbols that include basketball players and equipment alike. The symbols with players are worth more but any payout will be better if a player gets three or more symbols in a row from left to right. This total is even greater when more of the same symbol appears on each line. 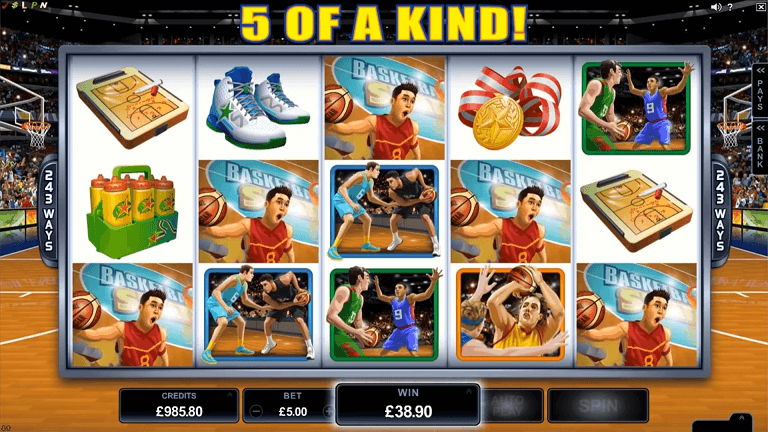 The special parts of this Android slot are consistent with what other video slots in this series have been getting in recent time. The Wild Shot feature is a popular part of this game. This is where a player will get wild reels that appear at random in the middle of the screen. A player can get as many as two of them at a time; these will cover the entire reels that they are on and will even offer guaranteed wins.

The Rolling Reels feature is an especially important part of the Android and iPhone slot. Any winning symbols that appear on the screen will disappear after they pay out, thus giving the player another chance to get a big payout. This feature will provide players with more chances to win.

There is also a chance for a player to get free spins off of this iPad slot game. The free spin feature works in that the player can get up to 25 free spins by getting three or more scatter symbols here. Rolling Reels can also be triggered at this point with the chance for a player to get a multiplier on each win. The multiplier can go up to ten times the value of the initial bet.

This mobile slot clearly compares with other Microgaming slots like Football Star and Cricket Star in that it features the Rolling Reels part and a general sports theme. This has been a tried and true part of the many games that Microgaming has been releasing in recent time and will continue to be a popular choice for all players to try out for. It certainly bears consideration among all players who want to try out unique ways to win thousands of coins.

The Vegas Paradise and Jackpot Paradise Casinos are two places that this mobile slot can be played at. The Vegas Paradise Casino has a 100% bonus and 10 free spins for players while the Jackpot Paradise has a $200 welcome bonus plus 10 free spins on various slots. Both of these mobile casinos offer support for Android and iOS devices alike and include many great games for players to try out when looking to get the best payouts. Terms and conditions apply to bonuses, 18+.