The Cash Stampede mobile slot is a game from Nextgen that has become popular in recent time for offering a great look that features a series of wild animals. These animals are critical to anyone’s success on the game as a player can get big payouts when more of them appear on the screen. This will especially be the case when in the special free spin round where the chances for a stampede to occur will be even greater. Of course, plenty of good things need to happen for this all to work.

The Cash Stampede Android slot works by using 243 ways to win on a five-reel design with 25 coins being used on a single spin although the value of those coins can vary based on what the player uses at the bottom of the screen. The game uses a series of traditional poker symbols as well as higher-paying symbols that feature animals like elephants and horses. The animals can join together when a wild symbol appears to start a stampede.

The wild symbol that triggers the Cash Stampede on this iPhone slot will only show on the third reel. If two like animals are paired with the wild symbol on the first three reels then the Cash Stampede re-spin feature will start, thus allowing other symbols on the screen to be spun again. A player can continue to get more re-spins if that player gets more qualifying symbols all around the screen. 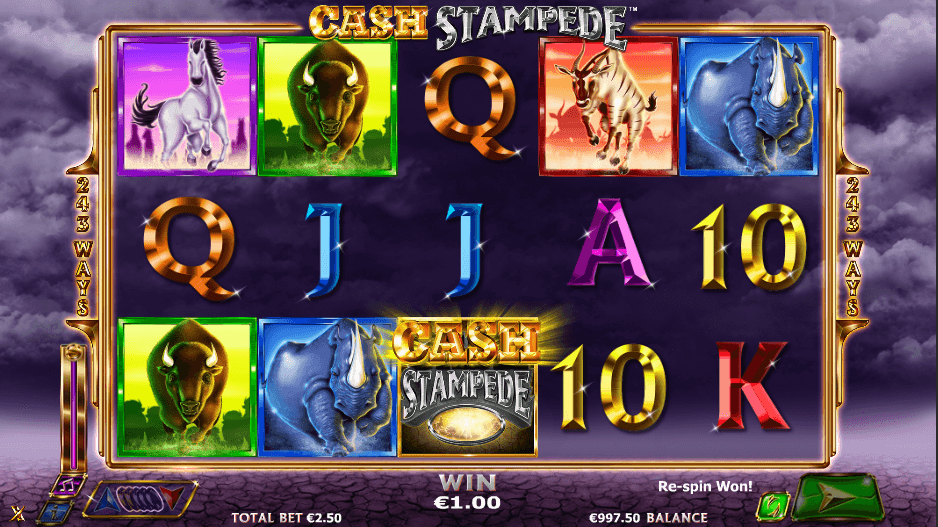 A player can get as many re-spins during the stampede feature on the iPad slot as needed. The key is to get more of these symbols on the screen at once to get more qualifying payouts from more lines.

The game also has a scatter symbol that will appear on the second, third and fourth reels. A player can get three of them to receive eight free games. The wild symbol will also be held in the middle reel during these free games. This in turn makes it easier for a player to possibly get more Cash Stampede re-spins.

It is tough to compare this with other games as it offers a more unique way for players to win through the many different animals that will appear around the slot. The Cash Stampede mobile slot will give a player many ways to win big through the extended wild features and extra re-spins that are included here. A player who especially reaches the free spin round will have an easier time with winning more here as well.

The Vegas Paradise and Jackpot Paradise are two great places for players to visit when playing with the Cash Stampede slot. These two places offer support for more mobile devices and especially include different options that are especially entertaining for players to try out including not only video slots but also classic casino games.

The Vegas Paradise has a $200 welcome bonus and up to 10 free spins on different slots. The Jackpot Paradise Casino has a 100% bonus and 10 free spins for select slots for all new players. Terms and conditions apply to bonuses, 18+.