Experience the Thrill of the James Dean Video Slot

It has been more than fifty years since his death but James Dean continues to be one of the most fascinating actors of our time. His style and sense of cool have been imitated many times over the years but it may be impossible for anyone to actually duplicate the style that he had. Nextgen’s James Dean video slot highlights the intensity of Dean in an appealing slot form.

The James Dean mobile slot for Android, iPhone and iPad players has a five-reel design with 25 lines. A player can bet from one cent to two dollars on each line, thus giving the player a maximum bet of $50 on a spin. Players on this Android and iPhone slot must play with all the lines on each spin.

The Android slot has numerous symbols that feature vehicles and the actor himself. The game’s symbols can pay quite a bit of money but a player must get at least three of them from left to right on the screen in order to win anything off of a spin. 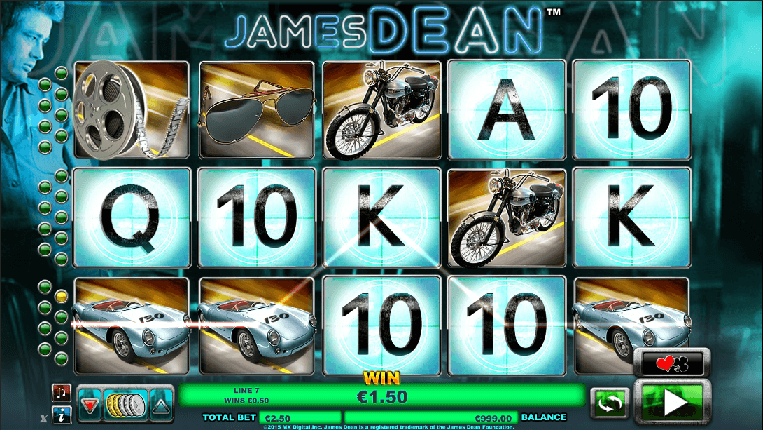 This game has some special features like a blue James Dean wild symbol. This will appear on the middle reels. A player can get three free re-spins when three of these blue wild symbols appear on the screen. The prizes on these re-spins are also tripled.

The Walk of Fame star symbol is the scatter symbol. A player needs three or more of them to get ten free spins. The prizes on these spins will be doubled.

Also, the game comes with a feature where the player will get a 5x multiplier if a clapboard symbol appears. This will provide the player with the Legend Spins feature. This part of the iPad slot will give the player a better chance to win the most money off of the special bonuses here.

The pink James Dean symbol will reveal the James Dean Pick Bonus. A player needs three of them on a spin to get 150x the bet. This will go up to 300x if this appears during the free game feature and even 750x if it appears in the Legend Spins feature.

There’s also a gamble feature after winning spins that will give a player two or four times the value of a bet depending on whether the correct color or suit of a card is chosen.

The James Dean video slot is tough to compare in that this game has its own standard series of prizes and bonuses. The challenge that comes with this game is that it is simply one that is just one that gives off a huge payout when the player gets the right symbols.