Wacky Waters, one of three slot machines which were recently announced by Playtech, is a game which is themed around the ocean, specifically around the various creatures which live in it.

The hero of this particular slot machine is Albert the Blowfish, and along with his wacky friends, he appears on the reels and triggers various interesting features. The slot appears to be designed with mobile gaming in mind, as evidenced by the intro video. The slot has 5 reels, 15 lines and right now we know of at least one feature which can pay up to 100x the bet.

While there are plenty of good ocean themed slot machines, most of them go for the beauty and don’t really try to make it look amusing. Wacky Waters does this with the help of various characters, including Albert of course, the wacky blowfish. The background graphics will show you the bottom of the ocean, with coral, with plants and with fish swimming around. On the reels, the images are a combination of simple playing cards and pics with various cute or wacky creatures (fish, clams, etc).

One feature available here is called Puffin Up. In it, you are asked to puff up the blowfish, by clicking on it multiple times. This will bring you multiple randomly placed wilds on the reels of the game, for an improved chance to get paid.

Wild symbols work here like they do in any other game. You shouldn’t expect them to replace scatters or bonus symbols, but they should be useful when they land on a payline with other matching symbols, where it can take the same role as them. Albert is the symbol which will act as the wild for the game. 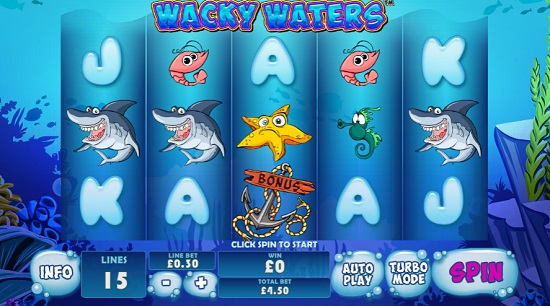 Another feature involves the Cash Crabs, and when it triggers you are asked to click on them, and get in exchange payouts that will go as high as 100x the value of the triggering bet. The symbol used here is marked with the Scatter logo, and it has a shell in which a crab is hiding, though you can only see its eyes. The location of the scatters is not important, as it can be on any 3+ reels.

The Anchor icon, with the Bonus logo on it, will bring you a feature where Albert is seen tied to an anchor, at the bottom of the ocean. You decide on which lane the blowfish will go up, once it’s released from the anchor. Depending on your choice, Albert will encounter various rewards along the way, which will give you free spins, extra wilds and increased multipliers.

The idea of the design is pretty good, but I’m betting that you’re not going to be that much of a fan of the style in which the symbols are made. It’s not really a great looking slot, more of a funny one.

I’m betting that you will enjoy Wacky Waters, it seems to have enough great features. It is also designed specifically with the mobile market in mind.