Sails of Gold is one of the latest games to be released by Play N Go, a 2016 title which focuses on one of the great explorers of our history, on Christopher Columbus and on the ships he used to cross the Atlantic.

He might’ve been the second one to do this, after a Viking in the 11th century, but most people still consider him to be the one to discover the New World.

The creator of this slot machine focused on exploration as well as on Columbus, so you have a picture of him, along with things like a compass or sail ships. This is a slot with 10 lines, 5 reels and which is capable of paying $25,000 cash.

While there are some adventure themed slots out there, few of them actually try to tell the story of the explorers that first discovered new continents or trade routes, brave men that risked their lives into the unknown. This is a game that is based on the voyages of Christopher Columbus, so naturally you’re going to find the sea in the background image, along with a tropical island with palm trees on it, just what our hero found when he reached the islands near America.

The quality of the design is good if you’re just looking at the symbols which are themed, and at the background image. It’s not as fun if you take into consideration the poker cards as well, even though they do have a compass drawn in the background. 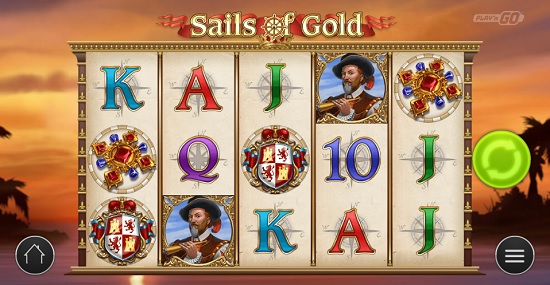 Columbus is visible in one of the major symbols of Sails of Gold. He is the only one to act as a wild during the base game, and this symbol is part of the free spins as well. You can use a wild as a substitute, wherever regular symbols need help, but not for a scatter. Having multiple wilds on a line, arranged from the left to the right, will bring you prizes of up to 5,000x.

The Ship icon is the other one to look out for, a scatter which needs to appear three times in different locations, in order to bring you its 10 free spins. You will get your chance to trigger the free spins again, if you land another set of three ships. While the free spins are in use, a Golden Ship symbol will be added to the reels, as an additional wild which can replace any other icon in the game.

I’m almost never satisfied when games use poker cards for their symbols, since it takes away something from the slot when it’s not 100% themed. The number of lines, just 10 available, is another reason to look at this game twice before giving it a chance.

The explorer theme and the Columbus connection are good reasons to try it out, but the game could’ve been better thought out when it comes to features and paylines.