Created by Net Ent, “Theme Park: Tickets of Fortune” is the latest game to be announced by this popular developer, and it is scheduled for release in 2016. We already know quite a bit about the game, including the fact that its theme is inspired by theme parks, and that many of its symbols and features are influenced by rides available in them.

The game relies heavily on features to make it attractive, but it also manages to offer a payout of up to 75,300 coins, and that’s for a layout with 5 reels and with 50 paylines.

The design of the slot is a bit on the childish side, at least that’s the impression that you get when you look at its symbols. That doesn’t have to be a bad thing though, as memories from our childhood are the ones that will often make the theme park look inviting once you’ve become an adult.

With symbols that consist of various rides (horses to ride, swans to stay in, and so on) and of poker cards made from balloons which bend, the game manages to be attractive for a player that has good memories at a theme park.

The slot does well feature wise, and that’s one of the aspects that I’m excited about here. I’ll start with the stacked wild, a symbol which we get in this case. With a stacked wild, you can get multiple symbols with substitution abilities on the same reel. Only three reels can get these stacks of wilds though, the ones from the middle. 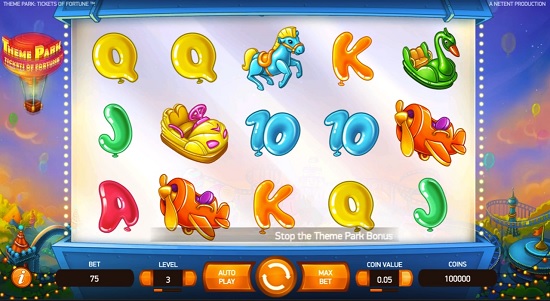 The Claw Feature relies on a single symbol showing up, and it looks like a gold robot with claws at the bottom. The claw will descend from above, and it will then come up with some kind of toy in tow. A prize will be offered to the player, the amount depending on the toy which was caught.

The final feature, and probably the most exciting one, would be the Ticket Wheel, which you get to when you have three scatter symbols in random spots on the reels. At this point you get a feature with a Wheel of Fortune, which spins multiple times and each time bring you between 1 and 6 tickets to use on the rides.

Once the wheel has stopped, you move on to a level with six different bonus games to choose from. You can use your tickets at these features, which are all inspired by rides from a theme park.

I haven’t found that much to be dissatisfied about, at least now when I don’t know all the details about the game.

If the game ends up being released like this, I expect it to be a fairly decent title, with big prizes and lots of features.