Chilli Gold x2 is a game which is offered by Lightning Box Games, a developer that is not that well known. The theme might be connected to the famous chilli pepper that is spicy, but the focus on the reels and in the general design is more on Mexico and various things that it could offer you.

What this means is that on the reels you will encounter symbols with a man from Mexico, with donkeys, birds and a couple of musical instruments. The chilli symbols are just for the special features. The game has 5 reels, 40 win lines, and its prizes could bring you up to $1,250, if you discount the Stellar Jackpots of up to $50,000.

It’s a cheerful game, and that’s one of the reasons why I think you will enjoy the graphics of Chilli Gold x2. The action takes place in the middle of the desert, which is an often used image in the case of Mexico themed slots. There is a man on the right side, and a donkey on the left, both quite cheerful characters. Besides those two, you can also see a bird on the reels, and it’s smiling at you as well. You have a red and a gold chilli papper among the symbols, both of them acting as wilds.

The presence of Stellar Jackpots should be a plus, as they improve the outlook in this game significantly. You don’t just have payouts of up to 500x/1000x, you can even win jackpots of $50,000 with their help. 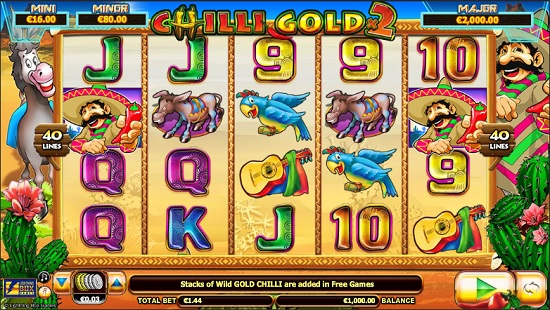 The first of the feature symbols is clearly the Red Chilli, which in the base game is the only one you will get. It is a wild, and at the same time it can be used as a scatter symbol. As a wild, there is no symbol that it can’t replace. It is used on the middle three reels only.

Depending on how many wilds land on those three reels, you can trigger free spins with them as well. Wilds apply 2x multipliers to wins which have them on the payline.

Used as scatters, on those three reels, the wilds can bring you 3 to 21 free games, for 6 to 12 Chilli symbols present. While using the free spins, Gold Chilli symbols will be added to the last four reels, and from there they will act as wilds, replacing only regular symbols. You can also retrigger free spins, if you happen to get enough Red Chilli symbols again.

If you discount the Stellar Jackpots, which are not directly included in the game, you end up with a 500 coins top prize, or 1,000 coins if the wild contributes. It’s a low payout, even for a game with 40 paylines.

The game has a couple of advantages, with its cheerful nature, good graphics and a couple of features which feel different. It has low payouts as well though, and I wouldn’t recommend it based on that fact alone.