In preparation for Euro 2016, the football (soccer) competition that takes place once every four years, between the World Cup events, Net Ent has released this game, Football Champions Cup. It might not sound like it is directly themed around this huge event, but that’s probably because they didn’t obtain the official rights to the name.

The theme is quite clear though, especially since all the countries which you can choose from are based in Europe. The slot’s football theme is not special, since there are dozens of other soccer themed slot machines on the market, many more than there are ones based on American football. The slot will have 5 reels with 20 paylines when it will be released.

One thing that I’ve always appreciated about slot machines which come from Net Ent is that the design is very good, and this game is the same way. It sports various images with logos of things like soccer boots or referee whistles, but without any images of players among them. The various poker letters and logos which are used were excellently made though, so the lack of football stars is not an issue.

A feature to talk about in this slot is the wild symbol, which has as an image a football, with a Wild logo in front. This symbol appears to attract additional overlay wilds whenever it makes its appearance, so you can expect to get twice as many symbols of this type. 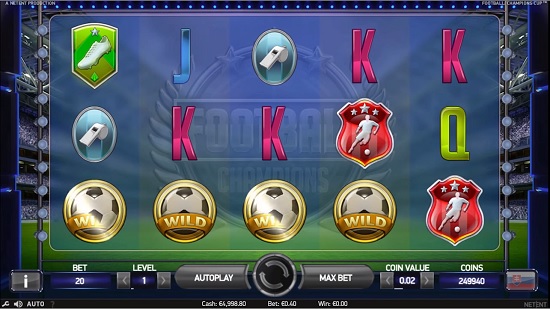 A Shootout Bonus Game can be triggered by the presence of 3+ scatter symbols, which have a Bonus logo on them. In this feature, you are asked to pick the direction of the penalty shot. If the goalkeeper doesn’t catch it, you get a prize from each choice you make.

Free spins are also part of the deal, and they will be offered as a result of three scatter symbols with the Gold Trophy Cup appearing on the middle three reels. Should that happen, a Free Spins Tournament will begin, where the nation you picked will advance towards the final by defeating other countries along the way. In order to win a match, a country needs to land 7 wild symbols of the right type on the reels. Blue wilds are for the home side, while red wilds score goals for the away team. Should you reach the tournament final, and then win it, a 10,000x payout awaits you.

The fact that they preferred to use poker cards among the symbols, instead of simply adding some cartoon style football players to the reels, is a downside, since with a bit more effort the game could’ve had only themed symbols inside.

I think most football fans will enjoy this game, with its graphics being elegant and quite well made, and with the list of features looking the best among its pros.