Inspiration for the Titanic slot comes from both the 1997 film and from the original ship based on which it was created. The focus is on the film though, a natural conclusion since on the reels you will discover photos of four of the main actors, which will include Rose and Jack, played by Kate Winslet and Leonardo Di Caprio.

The original ship, RMS Titanic, sank in 1912, on its very first voyage, as a result of a collision with an iceberg. The slot has the right design for that era, quite heavy on the shades of brown and looking vintage, and on the 5 reels the developers from Bally placed 25 lines and are offering a jackpot of $50,000.

Though they could’ve gone even farther with the graphics, the truth is that it actually looks quite right the way it is right now. The game has a lot of vintage looking items on its reels, while the background image is simply a wooden board. There are golden decorations all around the game area and around the betting and option buttons, while on the reels the symbols are mostly with the four main characters, and with things like crates, barrels or luggage, along with white gloves, pocket watches and even an image of the Titanic.

You’re going to encounter about three types of wilds, and each one will come in a version with a 2x multiplier as well. They’re the Wild, the Jackrose Wild and the Ship Wild. These can substitute for any other symbols, with the exception of the other wilds. 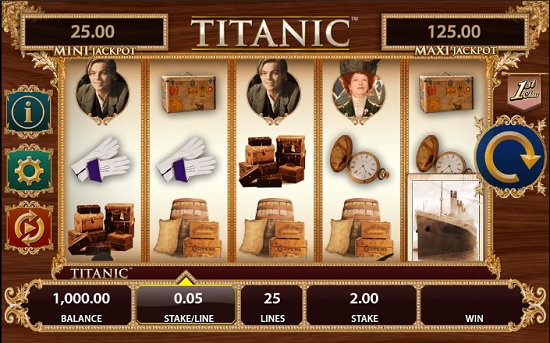 The way to get the biggest payouts of this game seems to be with help from the symbols that have the Jackrose, Jackrose Wild or Jackrose Double Wild. Should you land 2 or more such symbols on the reels, they will pay a prize, which could go as high as 500x the total bet.

There are some random features as well inside, including one called Mystery Double Wilds. It adds between two and five Double Wild icons to the last four reels of the slot, which should give you big chances of forming combinations which pay well.

Another one is called Mystery Wild Reels, and from it you get two wild reels, placed at random in the game. Finally, there is the feature called Jack’s Drawing Mystery, where you have to discover matching drawings of Jack’s in order to get their prizes.

You’re going to have to pick a wager to stick with, and it will take the form of a ticket for a cruise aboard the Titanic. The idea is cute, but the way it was implemented asks of the player to go to a new screen in order to decide the wager value. You also have to use an additional 15 coins for the extra bet, and it doesn’t really mention this on the main screen, it’s buried deep in the paytable info.

It’s an obvious choice for anyone that appreciates the movie or the actors that played in it. It does quite well with its features, but there are a lot of pages with text to explain them all, so it could’ve been simplified somewhat.