Home » Game News » Huangdi – The Yellow Emperor, To Be Released in January 2017

Huangdi – The Yellow Emperor, To Be Released in January 2017

For this game, we’ve found that Microgaming chose a theme that should be quite popular in China. Huangdi was a legendary ruler of China, one of the Five Emperors mentioned in their ancient stories.

The Yellow Emperor, as he was also called, ruled from 2698 to 2598 BC, according to the chronicles.

The game we got here will be launched in January 2017, and it will give players a setup with 25 lines, with 5 reels and with payouts of 1,000x. We know so far that the game will have scatters, wilds and free spins to offer.

The overall look of the game is not a typical one, as you will find out yourself if you look at its themed symbols.

While the poker cards look simply like they were painted by someone with a brush, in different colors, the rest of the symbols give you wonderful images of swords, chests and other objects from that time period. The image from behind the reels has Chinese temples in the mountains, once again very well designed. 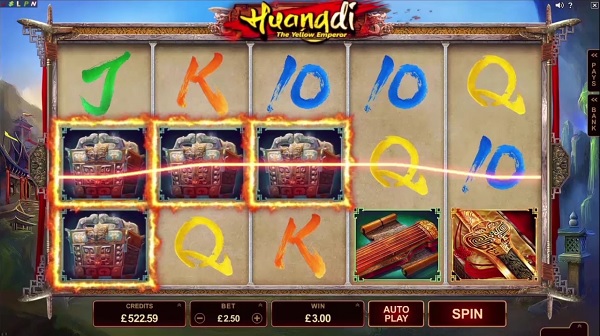 If you want access to the slot’s free spins, the requirement is to land at least three symbols with the golden Dragon on them. It’s an Asian style dragon, easy to recognize, and it will get you inside this special feature when appearing in any position on the reels.

15 free spins will be available to you here, and inside you will get a chance to take home up to 60,000 coins, according to Microgaming at least. A big advantage that the free spins have is that the wild symbols will expand and take over entire reels, whenever they appear.

To get the slot’s biggest prizes, during free spins especially, you will need the image of the Yellow Emperor to land on all the reels, and occupying all the positions on them. That would be a top jackpot kind of situation, the best possible case.

The Huangdi symbol is the one that acts as the wild, showing us a logo of the game. This symbol gets to act as a substitute, just like the Joker card would do if obtained in certain card games.

As usual, I’m not sure why they needed to use poker cards for the lower paying symbols. There are plenty of interesting images in Chinese history and culture that could be used instead.

It’s not available yet, it will be launched in a couple of months, but it does look like an interesting game for the future.