Help Out With A Train Robbery In The Arizona Treasure Slot 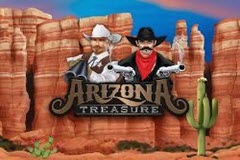 Arizona Treasure, a Wild West based game, appears to be telling a story about a train robbery, featuring both the bandit and the sheriff on its reels, alongside the usual treasure chest that is the target.

The game has a right look, it is offered by Genesis Gaming and it comes with an array of features, among which I’ve found a scatter, a wild symbol and the Showdown Free Spins.

The look that Genesis Gaming went for is the one that you usually expect to find in such a slot machine, but that can be a good thing, since you don’t really want modern designs for games which are inspired by certain time periods. You have a few good symbols to rely on, the ones which pay better or which have features for you.

They give you the two characters, sheriff and robber, and then there are treasure chests, locomotives, pistols and white horses. The list ends with the poker card logos.

Despite the presence of just 5 lines, I enjoyed seeing that combinations will form starting from either side of the screen, while most slots allow it to happen only from the left. It improves the odds of getting smaller combinations, since the maximum ones will touch both sides anyway.

The Sheriff Star, which the game uses for the wild, is capable of substituting for any other symbol, provided that it first lands in a position from which it can do some good. Wilds are going to be used for their own combinations as well, where they can pay more than any other symbol, up to 200 coins.

The Arizona Treasure Logo is visible above two pistols, in one of the symbols of the game. It’s a scatter, which can appear on the middle reels, and which both pays you and triggers free spins when it is present in all three positions.
Showdown Free Spins will get you 5 free spins to start with.

You have a 1x multiplier at first, plus a choice of one of the two extra wilds.

The wild that you pick will bring you another round of 5 free spins, and a +1 for the multiplier, if it shows up more times than the other extra wild during those 5 spins. This can continue to happen, and you can reach a multiplier of up to 64x if you get the choice right enough times.

Even with the pay both ways factor, I still like my games with more lines, since they’re less boring to play.

Arizona Treasure is a game that I would play again, especially since the RTP is at over 97%.

2016-10-05
admin2
Share !
Previous: The Link Was Announced by Gamevy
Next: Live Jazz, A Gift From Genesis Gaming For Fans of This Music Genre