James Win, a game which was released by Bluberi on Microgaming’s Quickfire platform, is a slot machine with a James Bond inspired theme, but without actually using the name of the popular 007 agent.

They didn’t have the money to create a licensed title here, but they did manage to approximate the experience of James Bond rather well. The game has all the gadgets, alcoholic drinks and guns that you’d expect from our secret agent, but the main character is called James Win, which is appropriate for a slot. The slot has the standard 5 reels, with 30 fixed lines and a jackpot of $30,000.

Bluberi did a very good job with the game, if you’re looking for a slot which looks like it has James Bond in it. You have many elements in the game which are common for Agent 007.

James Win for example, has behind him an image with a closing circle, which is shown in most intros for the Bond movies. There is also an Aston Martini among the symbols, a Martini cocktail, and things like dice or watches and binoculars. The actual quality of the graphics is the part that I’m less enthusiastic about.

The wild symbol should come in handy, but unfortunately it will not help you get the big payout, of 30,000x. It can act as a substitute for the jackpot symbol, but the prize value will drop to 250x if it’s present in that combo. Wild symbols are capable of forming their own combos as well, paying 50x to 250x for three to five icons. 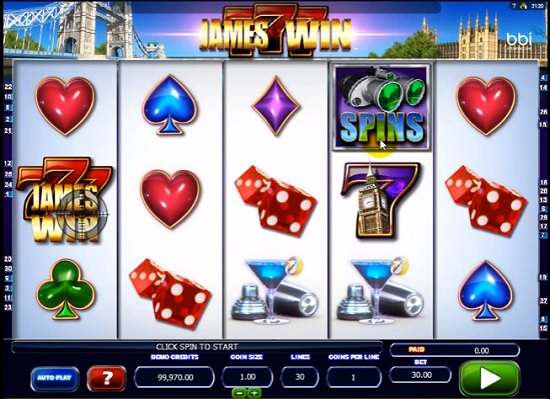 One major feature to look out for is the one with free spins. Triggered by three symbols with Binoculars, present on the reels 2, 3 and 4, in any scattered location, the feature has 7 free spins for you. While in free spins mode, if you get the Lady Spy on the 3rd reel, you can get from it as many as 6x additional wilds, with 2x multipliers applied by each one.

Multiple wilds combine their multipliers, so with four of these extra wilds in a combo, the payout could be at 16x the usual value. The unfortunate part is that free spins can’t be retriggered.

London Chase is a bonus game, which is activated when the reels 1, 3 and 5 get scattered Villain symbols. You get a board on which you have to advance, and you do this by spinning a wheel. You get missions this way, and there are prizes to be had as well.

The design style seems a bit dated, or maybe it’s just the presence of the four card suit icons that is influencing me. The rest of the themed symbols don’t look particularly good either though.

James Win should be a decent pick for a James Bond fan, but it’s obviously not the same thing as the original, just a copy.