The Rift is a Thunderkick slot machine, whose action seems to revolve around a rift that opens up in the middle of a road at night, an event that will draw energy from the world’s magical artifacts.

Though the stone paved road will give you the impression that it’s some Victorian age city where the action takes place, you’re not going to be able to tell for sure. There are mostly magic related images on the reels of The Rift. The slot has 17 lines arranged on 5 reels, and the top jackpot can bring you $3,000.

It’s not a theme that you would guess that you would find inside, and as far as I know it’s unique to this game. The magic is blended in, and is actually indicated by the symbols which are placed on the reels, among them being spell books, potions and various coins or even pocket watches.

The quality of the design is quite good, at least I enjoyed what I saw in the game. The symbols are not that exciting though, nothing that stands out and acts as a major character or symbol to draw the attention.

The first feature to talk about would be the Wild. Shown as a simple logo which is surrounded with a pink pentagram, this symbol is capable of forming its own combinations only when it takes over all five positions of a line. Otherwise, you’re going to use it as a substitute, a way to complete other types of combinations. 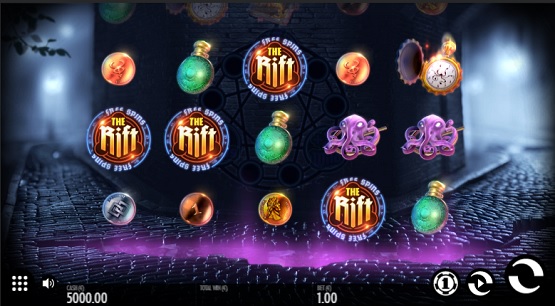 Rift Spins are triggered when two scatter symbols are present on the reels, in any position. These have the game logo on them. The Rift Spin gets you a better chance of forming a combo, having in it multiple extra wilds added to the reels.

Should you get at least three scatters with the game logo on them, the result will be a feature with free spins. 10 to 20 free spins are given for 3 to 5 scatters, and for each one that appears on the reels as you play, you light up a different part of the pentagram. For every three steps that you complete, you will be given 2 free spins and 1 sticky wild.

The Rift has plenty of things for you to do, especially if you manage to land that bonus feature with free spins. It has low payouts as well though, so I wouldn’t recommend it.