The Rugby Star mobile slot was recently designed by Microgaming as a variation of a few other sports-themed slots that the company has made in recent time, particularly the Cricket Star and Football Star slots. This is a game that is designed in a similar manner yet it still has plenty of popular features that make it a game for all players to try out. It is currently available for Android, iPhone and iPad slot players to enjoy so they can get after some big payouts while on the go.

The Rugby Star game is an Android slot was introduced around the same time as the Rugby World Cup began. The game has a design that features a number of rugby-themed symbols and a background that adds to the overall appearance. The game also has five reels and provides players with 243 ways to win. The game pays out from left to right as well.
The player can go with many different bets around the iPhone slot. The lowest level for a bet is fifty cents so it will still be a popular choice for all bargain players to go after when trying to enjoy this exciting game. 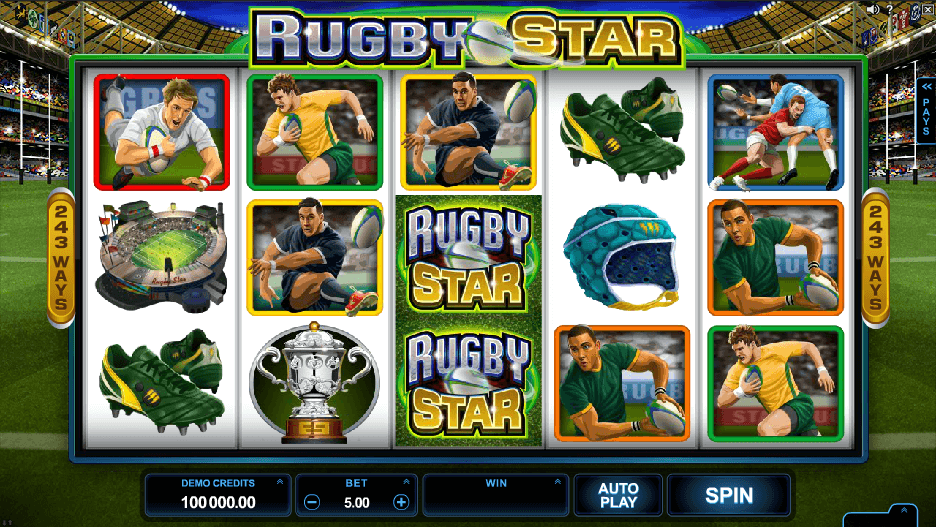 The iPad game has various wild symbols that will appear all around the screen. The Rolling Reels feature will appear at many times around the entire game as well. When a win occurs, the player will get the winning symbols to spin again, thus adding to the player’s chances of getting another win.
The Wild Pass game can also be triggered at various times. This will cause one or more of the middle reels to become a totally wild reel. This will increase the player’s chances of getting a huge payout.
Scatter symbols can also be found around this iPhone and Android game. A player can get as many as 25 free spins although the total will vary based on the number of symbols that do show up within a line.
The Rolling Reels feature will also occur within the free spin round. This can provide players with a multiplier of up to ten times the original value of the win depending on the total number of wins that the player gets off of that one round.

What It Compares To

The game’s features are similar to what the other Star games from Microgaming have. The game requires players to find the best wild symbols and to get more like symbols to truly take advantage of the big payouts that are possible. The chance to win more than once off of one spin is an especially noteworthy part of the game that players will enjoy.

Players looking to enjoy this mobile slot should try out the Jackpot Paradise casino. This is a mobile casino that has many different slots for Android and iPhone users to enjoy. It also has a 100% match bonus on first deposits that is good for up to $200 in value so players can enjoy some huge payouts for whatever they desire. Terms and conditions apply to bonuses, 18+.