Microgaming has followed up its Oriental Fortune video slot with the Lucky Zodiac slot. This is a game that has its own slight Asian influence to it with a series of Chinese symbols all around the game. The game is especially expected to be hit with mobile slot players thanks to the many ways how they can win here. The slot particularly showcases a unique display that has plenty of symbols with a varied number of them potentially being wild symbols depending on the game mode that the player is in.

The Lucky Zodiac Android slot has five reels and twenty paylines. It also has a series of wild symbols shaped to look like the slot’s logo. There are also a number of scatter symbols shaped like firecrackers that will appear all around the game.

The game is themed off of the Chinese zodiac calendar and features a number of animals. These animals are important as they are going to provide players with bigger payouts when the player gets into the bonus spin section of the game.

The game lets a player spend from one cent to ten dollars for a total of up to $200 on a spin. The game also has its own gamble feature after all winning spins that lets the player choose the color or suit of a card to possibly get two or four times one’s winnings. A wrong guess will still cause the player to lose everything that was won on a particular round. 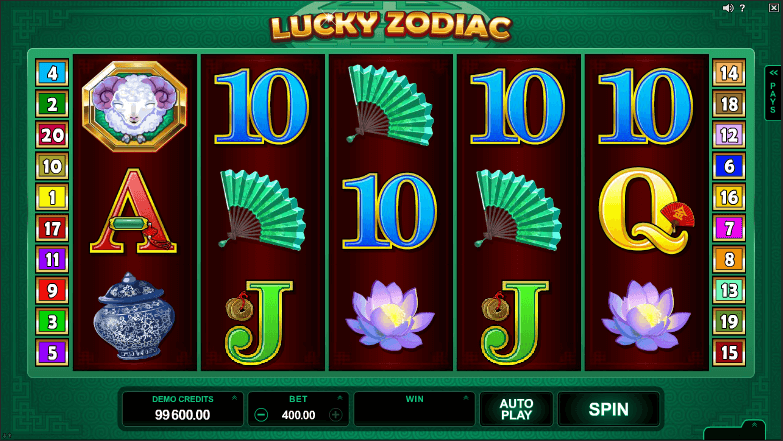 The scatter game works in that a player who gets three or more scatter symbols on this iPad slot will get twelve free spins. A multiplier is also included although it is varied in terms of its worth. The multiplier can be up to seven times its original value.

Zodiac symbols will also become wild symbols. These are represented by the many animals of the zodiac calendar. The free spin feature can also be retriggered later on if the player gets enough scatter symbols during the free spin round.

This iPad slot is being compared to the Oriental Fortune, another game from Microgaming that is based off of classic Chinese features. This Android and iPhone slot is still made with its own unique feature that entails the use of multiple wild symbols that can appear exclusively within the bonus game. The chance for a player to win thousands of dollars on this mobile game is especially prevalent. This is a popular game that gives players a number of ways to win thanks to the wild symbols that can appear at random, thus making the game all the more exciting for today’s players to try out.

The best place to play the Lucky Zodiac mobile slot is the Jackpot Paradise online casino. This is a mobile casino that supports most devices for play and has various different slots for people to play with on their Android and iPhone devices among others. The casino also has a 100% welcome bonus of up to $200 on all new accounts registered with the site. Terms and conditions apply to bonuses, 18+.