Magic Jester, from Novomatic, will have for you a classic inspired game, with quite a few pub machine symbols and images of poker cards, things that you usually find in older games.

This is a modern title though, with modern features, including a wild and something that they call magic reels, giving you the possibility of forming combinations with a lot more than 5 symbols in them.

Top prizes can be impressive, but this slot with 5 reels/10 lines offers only a 800x reward, so the impressive part comes from the wager that you have to use to get to its maximum potential.

I rather enjoyed this version of a classic slot machine, put into a modern form here. The main character is the Jester, acting as the wild, and he is accompanied by a few symbols that show a 7, a bell, a melon and the cherry. The rest of the symbols get poker cards, standard choices for way too many games these days.

The area behind the reels is used only as a way to complement the rest of the design, showing an abstract image, with a mix of greens and blues. Once you take it all in, you will find that it has a good enough look that it will not annoy, but it’s not going to win any prizes either.

If you’re looking for the regular features, the Jester Wild is the only one you will see that’s acting as usual. You use wilds only as substitutes here, as ways for you to form winning combinations by putting together regular icons with wild ones. The payout will be the one advertised for the regular symbol that gets the help. 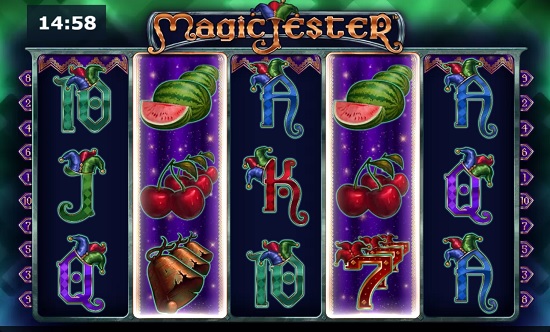 The Magic Reels should get most of the attention though, because they’re the ones that give this game something to brag about. You get at least one magic reel each round, but you can end up with all five highlighted and benefiting from its powers.

Symbols that are not poker cards will be transformed into double or triple versions of themselves if they’re on that reel. Any combination formed that round will take into account how many objects are found on the symbols, not just how many symbols there are.

You can form a combo which has as few as three objects, or there can be up to fifteen of them. This is possible only for the symbols with the cherry, melon, bell, 7 and Jester.

There are plenty of things to dislike as well, like the payouts which go up to 800x only, or the boring choice of theme.

Magic Jester has a major feature to make it a fun experience, and a few downsides to take its appeal down a notch.

2016-09-23
admin2
Share !
Previous: Experience Life In The Jungle, With Mr. Monkey
Next: Search for the Leprechaun’s Loot in Rainbow Jackpots