Guns N Roses continues to be one of the world’s most influential hard rock bands. The band is the focus of its own new iPhone, iPad and Android slot. The Guns N Roses mobile slot is from Netent, one of the top names in the world of video slots.

The GNR iPhone and Android slot features a design that features symbols and sounds of the band all around the place. The game’s design features music from the band with the player having the option to choose what one wants to hear while playing. Meanwhile, the game has video and photo footage of the band throughout the years to add to the intensity of the game.

This game uses a 5×3 layout and has 243 ways for players to win. The game’s symbols include many that are iconic of the band’s history. There are also bonus and wild symbols on this game.

The bonus parts on the GNR mobile slot make it a thrilling choice that is different from other games out there. The slot features wild symbols that can expand to cover entire reels. There is a chance for a player to get three consecutive wild reels on a single spin.

There’s also a random multiplier that will show up on random spins. This will give the player up to ten times the original value of a payout on a spin.

The Appetite for Destruction wild feature is one thrilling special feature that will give players a better chance to win a huge total. The game uses a setup where the three middle reels will be filled with wild symbols, thus adding to the overall totals that a player can get out of this game.

The Encore free spin feature will also show up when enough bonus symbols appear on this game. This will add to the chances that a player has to win something big. 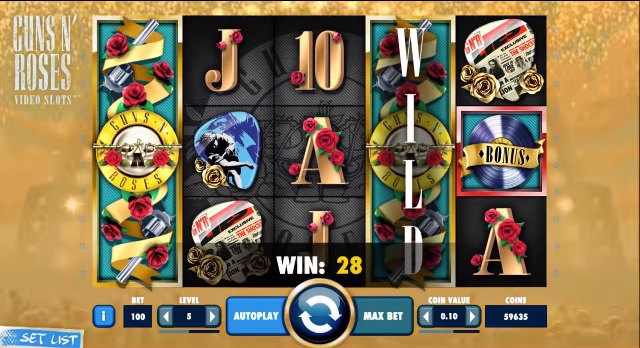 The Guns N Roses video slot is clearly different for offering a huge series of band-related symbols. That is, this is a game that has actual music from the band and assorted symbols that are relative to the band’s long history and the intense attitude that they have projected over the years. The thrill of the game is clear as players will certainly love to play along with it.

The Jackpot Paradise Casino has a special where a player can get $200 in free money on one’s first deposits plus up to 10 free spins on assorted slots. The Vegas Paradise Casino has a welcome bonus that will give the player up to $200 in free money over the course of that player’s first four deposits on the site. Other smaller bonuses are available for use around different places on the site. Terms and conditions apply to bonus, 18+.