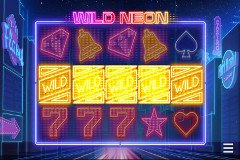 Wild Neon is a mix of things, theme wise. You’re being taken to Las Vegas first of all, but the city is shown mostly as support for the various neon signs that are placed on the buildings.

The symbols are all classics, and they range from card suits to fruits, as you will see yourself. The neon style sign plays a big role, being used for the logos and for the symbols which are on the reels.

It gives the entire thing a very futuristic look, almost like you’re in the Tron movie.

Established since 2010, Push Gaming is a London based game developer which is independent and which has a small crew of mathematicians and designers. They work pretty well together, as evidenced by the slots they managed to put out so far.

They will often go with themes that are not very easy to find at other developers, so there are hockey games, farm themed slots, and so on. There are a couple that are less impressive theme wise, like Gems of the Gods, Wild Neon or Bonus Beans, but they’re still very well made.

They’ve grouped a lot of information and options in a single menu, accessed from a button which is placed on the far left side at the bottom. It’s a good interface, rather bland looking thanks to its gray and white combination of colors, but it works.

You will get to use the Wild symbol in the same ways that you would in other games. As replacements, these are perfect because they can be included in various combinations of symbols.

As long as their appearance is in the right position, they can help out. You also use them for combinations of their own, with up to five wilds used to pay you the jackpot.

The wild symbols get a feature called Linking Wilds. When two wilds appear on the reels, the symbols which are between them will be transformed into wilds, until they are connected.

The Bonus Horseshoe sign is present on the reels 1, 3 and 5. You need all three on those reels, to access the free spins. You start with 5 free spins, but you also get additional features that you can trigger through a small bonus game. You can get more free spins, 2x multipliers or additional wilds.

The $2,000 jackpot doesn’t look like much, not with a $100 wager per line required to get it, but thanks to the Linking Wild feature, the odds might be better than in other games to get it.

Wild Neon has a theme that I’m not happy about, but the feature section was very well chosen.