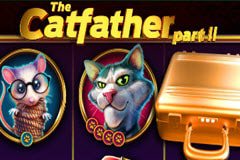 The Catfather in this case is a cat that leads a criminal ring, the likes of which can be compared with the mafia apparently.

There are cats as the members of this crime family, and you can see them all among the symbols that pay well in the game. As you might’ve gathered from the title, this is the second game to have this name, and it must’ve been popular if it got a second slot machine from Pragmatic Play.

The reels are found inside a house, one with dark red wallpaper on the walls and a bit of a creepy atmosphere thanks to the red light. The reels have golden borders, and some of the symbols have diamonds and gold in them (the poker cards). The higher paying symbols give you a mouse that’s tied up, along with four cats as the gangsters.

Pragmatic Play is not an old company, but with over 150 games available, out of which 80 are playable on mobile devices, it’s clearly an established developer.

They have both titles in HTML 5 (which are available on all devices) and Flash. They translate slot machines in 16 languages, and they make them available to players from 78 countries. A couple of games that they’ve impressed me with include Journey to the West, Romeo and Juliet and Beowulf.

The options that you can modify in this game are available from the buttons placed on both sides of the Play button. They will give you access to the number of coins which will be used per line, 1 to 10, as well as their value, which is between $0.01 and $0.50. With 30 lines always active, the bets will vary in value between $0.30 and $150.

It’s not a bad design that The Catfather Part II offers us here, with cat characters designed to look like thugs and mafia members, while the only victim is a tiny little mouse that looks a bit like a geek that’s being bullied, with its large glasses.

They’re all very well designed, but even though the poker cards come with diamond studs, I still don’t like them.

The wild symbol has an interesting image, with two black cats showing their heads out of a cardboard box. It might be the wild sometimes, and so you can use it to get paid more often since it will often be a substitute, but it can also be a direct method through which you will get paid.

I’ve also found a Bonus symbol in this game, in the form of a gold plated suitcase. The symbol, a scatter, will trigger 10 free spins if it ever lands in 3 to 5 locations on the reels, while also paying 1x to 15x total bet.

The free spins have the advantage of landing the stacked wilds each spin, not just on some of them as it is in the base game. You can retrigger the feature with an extra 5 free spins.

The top jackpot appears to be worth $25,000, the equivalent of 50,000 coins being won if you get five wilds in a combination.

The Catfather Part II looks like a promising new slot machine from Pragmatic Play, a developer that got us used to interesting games.