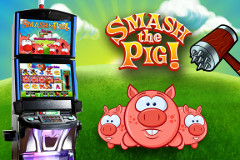 Farm themed games are not unusual these days, and we’ve seen a number of them pop up in the last few years, along with the older titles in this category.

The slot we’re looking at here, which comes from Spielo, is called Smash the Pig for a good reason.

It seems to borrow both from farm raised pigs and from the piggie bank idea, with the hammer used in this case being the kind you would see in the kitchen, used to make the meat tender.

Breaking the piggie bank should result in cash coming out, so that’s one of the other things that the game focuses on, on cash.

Symbols are mixed, some offering simple images of Royals, others showing you the piggie bank, a couple of pigs together, cash stacks, hammers, logos and coins.

Spielo is the company that was formerly known as Gtech, before it merged with IGT. The two companies, one from Italy and the other one from US, have created a huge entity together, and they now activate both in the online and the offline markets.

They have some wonderful titles to offer, and they continue creating new ones. Smash the Pig is an excellent example of a fun slot machine that they can offer.

It’s a pretty cheerful looking game, despite the pig smashing action that it advertises. There are green fields for the pigs to roam on in the background, while the reels are getting cartoon style icons which match well the comedy implied in the title.

You will find that a combo can form either from right to left, or from left to right, as long as the symbols are next to each other and on the same active line.

Pig symbols are going to be used for the features that can be activated. One of them shows you just one pig, with a dollar sign on the side.

That’s the scatter symbol that triggers a bonus called Pick a Pig. 3 to 5 symbols in view will do that for you, and will ask you to choose one to get you a prize of up to 20x the bet, additional picks or even access to the other bonus game.

Pig Smashing Bonus can be accessed either through the Pick a Pig feature, or it can be triggered directly by the Bonus Pigs symbol, when it’s in 3 to 5 locations.

Luck is added to the Luck Meter at the same time, and you will have picks to make for as long as there is still some remaining. With each pick, the luck diminishes in the meter. You get 8 pigs to choose from, and once you’ve picked 5 you can get additional picks if you haven’t consumed all your luck yet.

Smash the Pig has some cool features inside, though there are no wilds like you might be expecting. The game is funny, looks pretty good and it will pay well.