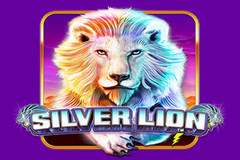 Silver Lion will take the player to Africa, to the savannah where you will find some of the most dangerous predators in the world, but also some of the more graceful creatures.

It’s been the subject of countless documentaries, and you probably know every creature that is used as a symbol, and love it for what it has to offer. A tribal motif has been included in the design, with a hunter in one of the symbols and in the background as well.

The tall grass from the background will tell you where in Africa you are, and the animals shown on the reels are those that can be found in the savannah. You have the lion, right along with trees, diamonds, hunters, but also with zebras, hippos and meerkats. You also have poker cards, unfortunately, since those definitely don’t belong in Africa.

From Lightning Box Games, I generally expect for games to offer features more than graphics, but that’s not necessarily true for all their games.

Silver Lion is one of the titles where I’ve enjoyed a large part of the design as well. The company, based in Australia, offers their games under license to various casinos around the world, some land based, the others online.

Thanks to the system of 5×4 reels, a total of 1024 ways to win are available in the game, with the wins formed on consecutive reels, not fixed lines. You need 40 coins each round to activate them all, and for them the bets will start at $0.01 and can be increased up to $7. You can spend at most $280 for one spin, with the minimum being $0.40.

If you discount the poker icons, the rest of the images shown in the game are well made, and appropriate theme wise. I’ve enjoyed that side of the game. Designed for mobile use, the majority of the options are grouped in the settings page, the one with the cog for its button.

On the reels 2, 3 and 4, there will be a symbol with an image that is associated with Africa quite often, that of a lone tree with the Sun behind it.

In Silver Lion, that image is used for the wild feature, which will be a way for the game to increase the number of wins that you form. It is far more useful in a game with ways to win, like this one, than on regular lines.

You will use the Silver Lion Bonus symbol, which has a pink diamond in it, as the scatter of this particular game. Having 3, 4 or 5 Diamonds anywhere on the reels of Silver Lion will deliver to you 8, 15 or 20 free games, right along with payouts of 80, 400 or 800 coins.

The wild symbol has a 2x or 3x multiplier each time it is in a combo during free spins. At most, there can be three wilds in a combo, with a total multiplier of 27x applied to the win value. You retrigger the free spins if you have at least two more Diamond symbols present, and you get 5 additional spins from them.

I’m not a huge fan of Silver Lion, but I have to admit that I did enjoy some of the features available in it, as well as the better designed symbols.