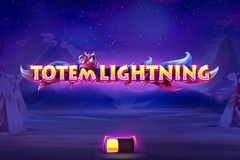 Totem Lightning has a theme that is not new, but I think that Red Tiger Gaming is one of the few that have gotten it right, and actually created something that looks good here. It’s a game with a Native American theme, which uses totem variants of different creatures of the prairie as symbols. The typical Native American decorations are also employed around the game area.

The symbols do start with Royal cards, all of them with small decorations that are theme related. Next, you have images of totem shaped animals like eagles, mountain lions, opossums and crabs. To the right side of the reels, there is a bar which shows you what symbols have been removed from the reels.

The developer in this case is called Red Tiger Gaming. It’s been around since 2014, so it’s quite new to the casino industry. Despite this, they managed to create an impressive number of slot machines already, though they’re not always as varied or as innovative as I’d like.

I’ve counted over 40 slot machines in their collection so far, and they’re launching new ones on a regular basis. The graphics always seem to be great, but the themes are often enough based on China, lucky leprechauns, Christmas and other just as common topics.

The slot has a total stake which ranges in value between $0.20 and $500. That’s the only part of the bet that you get to change, the total stake, so the game doesn’t ask you to form a wager for each individual line, using multiple coins, like it happens in other slots.

The game has 40 active lines, so your combinations will be formed like in most games, with matching symbols that are needed to be together and starting from the left side, at least three of them being required. 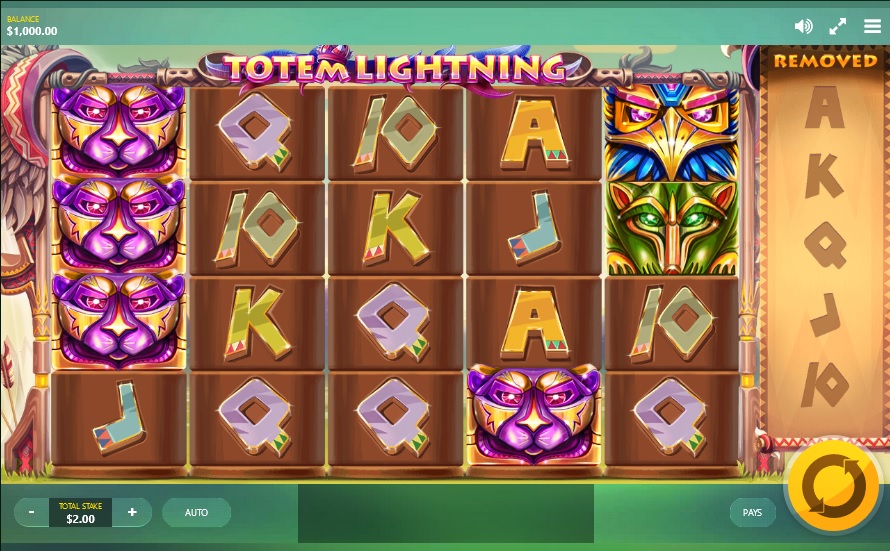 One of the features offered will be the Removed column, which is on the far right side of the screen. From time to time, a lightning strike will occur and will remove one low paying poker card from the reels. It will then be highlighted in the Removed column. The strike will also get you paid, rewards reaching 1,000x here.

The Bonus symbol shows a logo surrounded by golden feathers with red accents on them. If you get three symbols on the reels, in any position, you will trigger a bonus game. In the feature that comes next, you have to climb as high as you can on the Totem Multiplier, which will deliver payouts of up to 1,000x.

This symbol is considered a scatter, so you can use it even if it is present on different lines and reels which are not next to each other. The only thing that is important is that you have at least three visible somewhere.

The biggest payouts which are offered in Totem Lightning will go up to 1,000x, through the bonus features, while regular combinations offer up to 888x.

Totem Lightning has great graphics, but I’m not happy with the features which are offered, especially since it has no wilds or free spins.