Dragons Temple has been recently released by IGT, and what you’re going to get from it is a theme which has an Asian inspiration, relying mostly on the dragons that are part of the local culture, but also having the type of design that many games of this type tend to offer.

The feature list is an interesting one, coming up with expanding wilds, with scatter symbols and free spins.

There is a certain design style that is generally used in such games, and Dragons Temple has it as well. The Chinese/Asian style symbols are part of this slot as well, including here the way the poker cards are drawn, or the various objects placed on the reels, from the fish, to vases, temples or beautifully decorated envelopes.

Even the background seems to be a typical one, but beautifully decorated nonetheless, using images of trees from some kind of garden, but with a red overlay that changes the image somewhat. 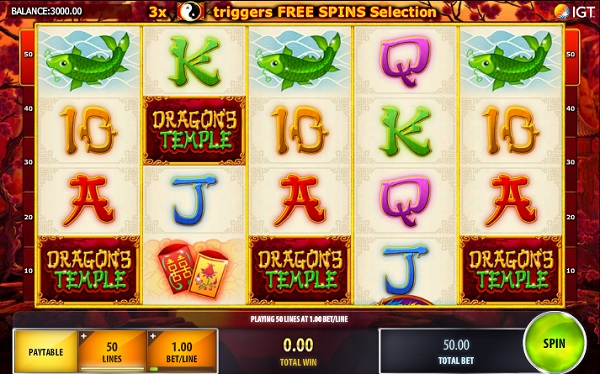 I’ve found the list of features to be among the most interesting aspects of the game. The expanding full reel wild is one, a symbol that appears to have five different variants, with Dragons coming in colors like pink, green, red, yellow or blue.

They take over entire reels, they substitute for the other symbols as long as they’re regulars, and they form combinations which pay as much as 1,000x.

Second, we should take a look at the scatter symbols, which are accepted only on the reels 2, 3 and 4. It’s the Yin Yang symbol that is going to appear here, and when you have them in two locations you get a prize of 1x the bet, while with three locations the prize will be 5x the bet.

The design might be well enough handled, but the theme was not that well picked. It’s a common type of theme, and the game is not original enough in that regard.

I’m not that crazy about the slot’s theoretical RTP either. In the long run, you can expect a payback in the range of 92.54% to 96.53%, according to the developers.

If you really enjoy Chinese themed slot machines, it could be worth a try. It’s the same if you’re a high roller since this game allows you to wager big.