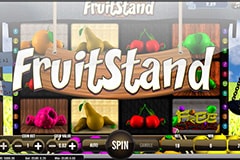 Fruit Stand’s action seems to revolve around an actual stand where fruit is being sold.

It looks like delicious stuff, the fruit stand being somewhere on the side of a road, so those are fruits that were collected from a local farm, not bought from the supermarket.

Given the theme, it’s not a surprise that the fruits are the stars of the game, and they are used in pretty much all the symbols of the game. The reels are placed inside the fruit stand, while in the background you can see green fields and the blue sky.

For symbols, the game uses logos of wilds and scatters, accompanied by raspberries, plums, oranges, watermelon, pears, apples and cherries.

Altea Gaming is based in Serbia, with offices in Belgrade. They are developers which create slots and other types of casino games, and they also can offer specialized solutions for the casinos which need them. They work with HTML 5, so their games are typically easily accessible on mobile devices.

I’m not exactly a big fan of their games, mostly because they take on topics that you can see at other developers as well. Fruit Stand is one example, but there are also games like Diamond, Magic Ball II, Sparkling Hot and Twin Reels.

The game gives you 10 lines to activate at most, and you can use at most 5 coins on each one, with the coin value allowed to get to a maximum of $0.20. You may end up spending $1 per line at most, with the total for 10 lines reaching $10 if you want to get it to that value. The minimum wager required is at $0.01.

The game has just 4 reels, which is an unusual number to get in a market where 3 and 5 reel titles abound. The combinations are formed with three or four symbols in them, matching ones and starting from the left.

You will recognize the wild symbol by the fact that its image has a crate filled with fruit and which has this word written on its side. Have this symbol part of a combination of regular icons, and it will take on the same role as them, being a perfect replacement.

It also doubles the value of prizes which are offered by regular combinations that have it helping out. The wild symbols are more than capable of paying you themselves, and they will form combinations that give away the top jackpot.

Scatter symbols are used as well, and they’re going to be images of the Free Spins logo, surrounded by the game’s fruits. You need either three or four logos scattered, to get the round of 15 or 30 spins for free, respectively.

One side of the game that I haven’t mentioned yet, but which I found a lot of fun, was the fact that the fruits explode when they’re in winning combinations, letting others to come in and give you new wins, if you’re lucky.

The game can pay $5,000 at most, and that’s with a combination of four wild symbols in a row, on the same line.

Fruit Stand might not look like much, but it has a couple of interesting features, and its payout of 5,000x will be delivered in exchange for a combo of just four symbols, not five like in most games.