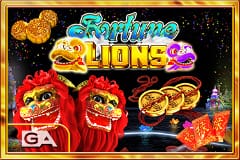 Fortune Lions is one of those Chinese themed slot machines that you recognize as being in that category immediately.

The images which were chosen in this case are going to belong to that category quite obviously, featuring images of Lion costumes, of paper lanterns and various other items.

There is even a red temple that is built all around the reels, with a city in the distance appearing to be celebrating the Chinese New Year.

Among the symbols used in Fortune Lions, there are a couple of wild icons which have pictures of Lion costumes, followed by icons with paper lanterns as scatters, with gold coins, drums, firecrackers and envelopes. The last half a dozen symbols are the less impressive ones, paying little and showing off logos of poker cards.

The company that offers Fortune Lions is relatively new, with just three years or so of history behind it, but it already offered multiple titles which are inspired by China, along with other civilizations.

If you want the ones with a similar theme to this one, then I suggest you look at 5 Elements, 88 Riches, Ancient Gong, Bushido Code, Dancing Lions, Dragon King and so on. As you can see, there is no shortage of Asian themed titles among their slot machines.

The bet per line varies from $0.01 to $0.50. Keeping in mind that the game has 50 fixed lines, which you always have to cover with 50 coins, you can figure out that the complete betting range is from $0.50 to $25 for one spin. It’s definitely not an expensive slot machine to play.

The layout has 5×4 reels and quite a few lines, though obviously it would’ve been better if there were fewer symbols on the reels, since the lines would’ve had better odds of landing combinations. The graphics are good, but quite heavy on the color red and there are a lot of things going on at the same time.

One of the special icons of Fortune Lions will show you two heads of lions, as costumes. This is the symbol to pay the largest amount when forming a combination, while at the same time landing stacked on the reels. Thanks to this ability, you’re likely to get multiple wins from the same round, if this symbol appears on at least three reels starting from the left.

You have a second lion costume symbol next, one where the image is not as polished, heavier on the yellow than the red. This particular Lion is a wild feature. You can use such symbols as substitutes, being part of regular winning combinations if they land where they’re required to be. They will not be replacements for scatter symbols.

In this case, the symbol which acts as the scatter has the Paper Lantern for its image. You use Paper Lanterns from any positions they happen to land in, but only on the first three columns. Get all three Paper Lanterns to appear at the same time, and a reward of four times the bet will be yours, along with the bonus feature.

You start out with 10 free games, and then you can retrigger the feature with another 5 games. For each free spin, there is a wild Lion symbol added to the last four reels, staying there until the feature is done.

The stacked symbol is the one to deliver the best payouts, which reach $500 in the best case scenario, which means 1,000 coins.

Fortune Lions is a pretty typical Chinese themed slot machine, but it does have pretty graphics and it might be worth a look.