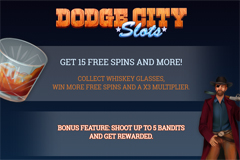 The Wild West is the setting of choice for Dodge City Slots. The name Dodge City should be familiar to anyone that has watched Western movies, since it was one of the great frontier towns of the 19th century, a place where outlaws were more likely to be encountered than the lawmen.

You get both sides represented in the game, among the symbols, while for the background image you will discover one of the smaller streets from the town and its buildings.

For the symbols shown on the reels, you will get three characters of the Wild West, starting with the sheriff, the outlaw and a cute woman. Next, we have images of Sheriff badges, of riding boots and of six poker cards (shown as three of a kind hands).

If you haven’t heard of Arrow’s Edge, I don’t blame you; they’re still quite new, being around only since 2014. The company has created over two dozen games for the online casino market, and I found most of them to be fairly enjoyable, even though the design is rarely as great as in other games that are released at the same time by other developers.

Titles like Aruban Nights, Days of our Slots or The Winning Dead show that they can have something unique to offer as well, not just recreate the same old themes that everyone else has.

The two options you get to make will allow you to change the number of lines, the initial number being 10 lines, which can be reduced from there. The other choice regards the total bet, and this one basically changes the line bet for you as well.

It’s a good enough looking game, but it’s not going to impress anyone, if they’ve seen similar Wild West titles before. The graphics are just acceptable, with pretty much the standard interface employed inside.

You will be working with three special symbols, among the ones that form regular combinations. The Outlaw Wild is the only one of the three that appears on all the reels, and which can form a regular combo on a line, with a reward of up to 10,000x.

Naturally, it can just as easily be used to replace some other symbol, as long as a prize is the result of its action.

With the help of Sally, one of the scatter symbols, you can trigger the free spins in this game. This symbol is used on the reels 1, 2 and 3. You need it visible on all three, to get 15 free spins triggered by it.

Whiskey Glass symbols which appear during the free games can be collected, and will give you either additional free spins, or free spins with 3x multipliers, if you have enough of them (3 or 6 collected).

Wyatt is the sheriff, and the bonus symbol. It’s also a scatter, and one that will get you to a bonus game where you have to shoot outlaws. Up to five outlaws can be shot, and just as many prizes will be won.

Prizes in the mid 5 figures range can be won thanks to the Super Slots Jackpot, while Cash Grab Jackpot will pay 4 figure prizes. The fixed wins will deliver even more than that, up to $250,000.

Dodge City Slots will be a fairly normal game with a Western theme, and a focus on one of the famous frontier towns of America. I’ve seen better slots with this kind of theme though.