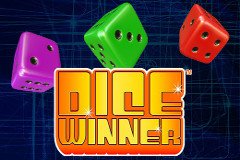 Dice Winner is indeed a game that’s getting its inspiration from one of the most popular casino titles ever, the game of dice.

Dice are used as symbols everywhere in the game, but you don’t always get the standard black dots on them, sometimes there will be various exotic images. Despite the dice theme, the idea is still to form a combination of three symbols here, since this is a title with four slot machines of 3 reels and 5 lines each.

For the symbols of Dice Winner, you first have the 6 symbols with the dice, having the numbers from 1 to 6 on them and with colors that range from teal to yellow.

There are three more dice symbols which offer prizes after that, with images of various drawings on them. The final symbol has the trigger for the Bonus Wheel and its image is done in red on the white dice.

The Austrian based Novomatic has proven in time that it has what it takes to be a big name in the casino industry. They’ve proven this in the last 36 years, the company being that old and activating mainly in the regular casinos, all over the world.

They have more than 19,000 employees and players from 70 countries can play their games. The move to the online world came in the last 5 years or so, ever since they bought Greentube to help them achieve it. They have a range of good games, just like they have some that are very simple, probably inspired by the titles they offer in offline casinos.

You get four slots to bet on, each of them marked with its own number underneath, but the wager asks you to decide only on the total amount, which will start at $1 and go up from there.

This is not your regular slot machine, so don’t expect the same experience from it. You still get the betting options at the bottom, with the slot machines placed in the middle and the paytable information at the top, but it just looks like a completely different game thanks to the four sets of reels that are used.

First of all, you have four slots present next to each other, each one offering 5 lines and 3 reels. The combinations are still formed on lines, with three symbols of the same type, and without any wilds to help you out with that. Even features can be triggered this way, with matching symbols of the right type on the same win line.

The Bonus Wheel is that feature, which you trigger with three symbols that have the image of the Red Drawing on the white dice. There will be instant prizes on that wheel, to be won if you’re lucky.

In certain situations, there will be bonuses offered to the player. For example, having 9 symbols of the same type on the 9 positions of a slot will result in an extra bonus of 200 coins being awarded. There are also multipliers used, on the rounds where you have 3 or 4 winning sets formed.

The game appears to offer up to 1,000 points, which can mean $500 for the player. It all depends on the wager that you made though, as well as the combinations that you formed on the lines.

Dice Winner is a game that’s not going to look as fun as a well designed slot machine, but which might be highly enjoyable if you’re a fan of dice in the first place.