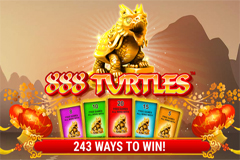 You’re likely to figure out for yourself that this is an Asian title, even before it loads up. The title mentions it, with its triple 8, the Chinese lucky number at its basis, but there is also the turtle, which is considered one of the great animals from their culture.

It’s the animal which signifies longevity, and it’s the only one that you can still see around today. Other Chinese animals, like the dragon, are no longer around us. For the background, there is a rather abstract image which mixes mountains and a lake, everything in shades of brown though, even the sky.

The game has among its various symbols a number of icons with the poker letters, followed by the images of gold rings with emeralds, red flowers, a gold fish, bamboo shoots and some kind of golden tree in a pot. For the truly special symbols, they’ve chosen the Golden Turtle and the Fish Gold Coin.

I’ve found GamesOS to be a rather interesting developer. It’s definitely not as well known as the big names of the industry, but they’ve been around for enough time, and they’ve managed to get their games inside some of the more popular gaming establishments around, so the quality of their titles is undisputed.

Their games are created with the HTML 5 technology, which makes them accessible both on PC, Mac and mobile platforms.

It’s a Chinese themed game, no question about it, and for the most part it’s got a typical look for such a slot. The focus on the turtle instead of a dragon or lion is the part that makes it somewhat different from the usual such game.

Expect for the wild symbol to be useful to you, as a substitute only, whenever it appears on the reels 2 or 4, but also on the right payline to be able to lend a hand. It can be a replacement for all other symbols, without exceptions apparently.

Use the Gold Coin as a scatter, but a less than ideal variant of one, which is still needed to appear on reels that start from the left, rather than being anywhere on the five reels.

Have 3, 4 or 5 such symbols, and in exchange you’re getting a reward of 5x, 20x or 50x the bet. There is also a selection of free spins triggered when these symbols are present.

You get five choices on this screen, with the number of free spins varying between 5 and 20. The thing that is different in each case is the random multiplier which the wild symbol can have. They vary between 2x and 5x for the choice with 20 free spins, and 10x to 30x for the one with 5 spins.

888 Turtles has a good design, has some features which can be immensely profitable if you manage to take advantage of them, and even something unique when it comes to its theme.