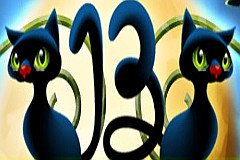 13 comes from Novomatic and it is a game with a witch and black cat in the main roles, so naturally it will make you think of Halloween, since that’s what you tend to get from developers when that holiday comes.

The rest of the design focuses mainly on the same things and on related imagery, using for example the image of a creepy forest for the background, more black cats at the top of the reels and various images, with voodoo dolls, with crystal orbs and so on, to represent the various symbols available inside.

In addition to the symbols that I’ve already mentioned, it’s worth noting that the ones which pay less also have the less interesting icons, with poker cards this time.

An older company, which started out in 1980 and since then it offered a lot of slot machines for brick and mortar casinos, Novomatic has made the jump to the online market as well, and they’ve been especially busy at it since 2011, which is when they acquired Greentube to help them.

Their games don’t feel particularly innovative, not when you have titles inspired by Ancient Egypt (Book of Ra), by the ocean (Dolphin’s Pearl) or by the Irish luck (Lucky Lady’s Charm).

There will be 10 win lines for you to use in 13, and they will be fixed by the looks of it. The game lets you choose the wager though, the one for the line more specifically, which will vary between $4 and $1,000. The maximum bet is probably going to be going as high as $10,000.

The game’s graphics are a lot of fun, though only if you look at the high paying symbols and at the image in the background, with its cauldrons in which potions are made, and with the forest nearby. The poker cards are basic though, and they don’t contribute anything to the design.

The Young Witch has been chosen in this game for the wild’s substitution role, meaning that the symbol will be used in this capacity, whenever its appearance is registered in the exact position in which it is needed.

The game will deliver a new combination if the right mix of regular and wild symbols appears, starting from the left side of a line. The Young Witch wild can be a replacement for most of those symbols, but there is one exception, and that’s the Black Cat scatter.

The Black Cat will get the other classic feature role, the scatter ability. You can use these symbols whenever at least three are visible, since that’s the way to trigger the free games in this slot. 13 free spins are triggered by this feature. One additional free spin is added to the count each time you land a new scatter symbol.

You should be able to take home a payout of up to 10,000x, which is considered a pretty good reward in any game these days.

13 is as enjoyable as many other Halloween themed titles which have taken the cute cartoon look, rather than the scary one. There isn’t something to make you want to choose it over the others though.